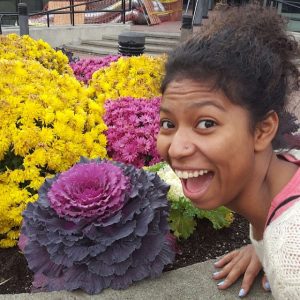 Kiani at the Environmental Consortium at Vassar College on November 2015

Kiani is currently the Social Media Coordinator. Kiani Conley-Wilson has been involved in SSTF since the fall semester of 2014. She quickly got involved with a leadership position in the organization by becoming Vice Chair and later SSTF Chair that semester. During her time at SSTF she has helped increased membership, visibility, and number events held by the organization. She has led SSTF members to start projects they are passionate about such as the Computer Conservation Project, the Solar Water Heater Project, and the improving the Environmental Education Center (EEC). She is always willing to lend a helping hand to both anyone.

She has played a helping hand in various events such as:

In the spring of 2016 she was recognized for her leadership and service to RPI by being inducted into the Phalanx Honor Society.

This summer she extended her sphere of environmentalism internationally to Panama and Costa Rica in a study abroad program. She will be learning ways to balances of society, environment and economy at these locations as well as prepare sustainable development plans. She will be exploring ecosystems new to her and accounts SSTF to helping her receive this amazing opportunity.

Kiani is currently a senior at RPI studying Sustainability Studies. She is involved in all projects SSTF leads including Greening Sodexo, the Green Revolving Fund, and updating the Environmental Education Center. She is involved in various organization and efforts including Greek Life, LGBTQ* (as a RPA member), sustainable work (on and off campus), and volunteering at local farms and support organizations.