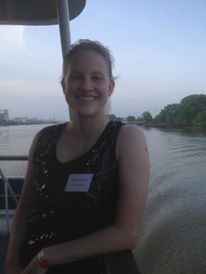 Elizabeth was a freshman in Vasudha in 2010-2011.  With several other freshmen in Vasudha, she planned several events; over winter break, she planned the first Vasudha Reunion with Anasha and Jay.  She also became Secretary of EcoLogic Spring 2011, a position she held until Spring 2012, when she was elected President of EcoLogic.  She was President for two years, until 2014.  Elizabeth went to Power Shift in Spring 2011 but did not become officially involved in SSTF until Fall 2011.  She served as Secretary of SSTF in Spring 2012 and Outreach Coordinator/Webmaster in Spring 2013.  She became Co-Chair of SSTF for 2013-2014, becoming the first person to hold that position and President of EcoLogic simultaneously.  In September 2014, her successor resigned and Elizabeth stepped up to be Chair of SSTF once more in October 2014.

Elizabeth’s favorite accomplishments in sustainability at RPI have been planning and running EarthFest 2014 which was featured in Inside Rensselaer twice and in the Troy Record once, writing the Sustainability Report 2014, creating separate and defined purposes for EcoLogic and SSTF, unifying and encouraging communication between the environmental clubs, and helping connect the different years of Vasudha starting with the first Vasudha Reunion.  Elizabeth has also volunteered at many Terra Cafe lunches and helped advise SEP for things such as people to contact.

Elizabeth also served as a Class of 2014 Student Senator for 2012-2013 and a Class of 2014 Class Council Member-at-Large for 2013-2014.  She was also somewhat involved in several other organizations including RSA (for Hey Red Go Green! several years including freshman year as well as WNDS RSA 2011-2012), Women’s Ultimate Frisbee, Rensselaer Pride Alliance and LGBTQ Safe Zone Trainings, and STS research groups including the Fracking Research Group and The Asthma Files.  She also interned at the Sanctuary for Independent Media for her undergraduate internship and at TRIP for her graduate internship.